Around 10km south of Kyoto is a picturesque place known as Fushimi, that looks out over the waters of Oguraike Pond.
It surged with life after the castle town and harbour were built in the late 16th century by Hideyoshi Toyotomi, as it was the base for riverboats that connected Osaka and Kyoto as well as being in a crucial location in which various trunk paths from Osaka, Kyoto, Otsu and Nara would meet.
Amongst the many people that travelled through Fushimi was Ryoma Sakamoto, one of the people responsible for the end of the Tokugawa shogunate. 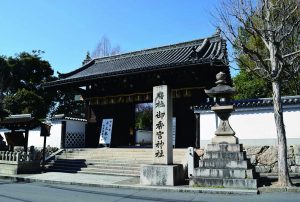 The local deities of Fushimi dwell here. In the battle of Toba Fushimi in 1868, which saw the dawn of modern Japan, the new governmental army – known as the Satsuma army – set up operations here and fired relentlessly on the Fushimi Magistrate’s office in which the Tokugawa shogunate had barricaded themselves in. In the grounds of the shrine is a monument marking the battle of Fushimi, and the Meiji Restoration. The shrine has been here since much further back in time, and still has records from its refurbishment as a Shinto shrine in 862. It even has two auxiliary shrines here, as a symbol of how it was the heart of a battle that affected an entire nation in the Momoyama period (late 16th century). Toshugu shrine, erected for Ieyasu Tokugawa, and Toyokuni shrine, erected for Hideyoshi Toyotomi. 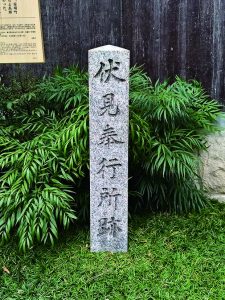 In the Edo period, Fushimi was one of the strategic city of the Tokugawa shogunate, and was where their magistrate’s offices were situated. In the battle of Toba Fushimi, in was the base of the Aizu domain and special police force known as the Shinsengumi. Toshizo Hijikata and Shinpachi Nagakura came from there to Gokonomiya Shrine to carry out their attack. Nearby Japanese inns and places like Uosaburo still have bullet holes on their framing surfaces today. 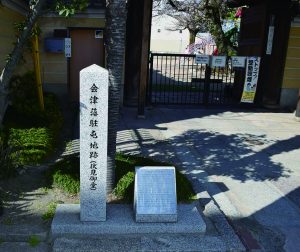 It is said that the Fushimi Mido temple here was a camp for the Aizu domain, and that the tatami mats from the main temple building were used as shields amidst a crossfire between forces. Today, only the main temple gates remain, and a nursery school has been built inside. It’s also worth mentioning that this road is “Yotsutsuji Yottsuatari” (a group of four roads that “meet” in a crossroads in which none of them continue in a straight line) – a key characteristic of this Toyotomi castle town. 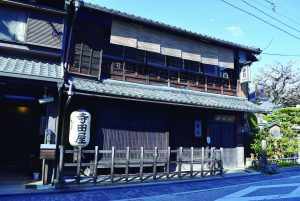 This traveller’s inn for Satsuma clan purveyors was the stage of two “Teradaya Inn” incidents. Shinshichi Arima had a shoot-off with another Satsuma clan member, and the constable of the Fushimi Magistrate’s office attacked Ryoma Sakamoto here too. The owner was named Otose, and the lady that would become the wife to Ryoma also worked there, known as Oryo. 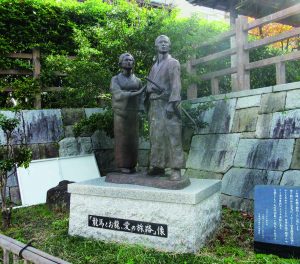 After their injuries from the Teradaya Inn incidents the two lovers, Ryoma and Oryo, boarded the ship known as the Sanjyukkokusen to take time to heal and headed for Kirishima of Kagoshima. This is now known as Japan’s first ever honeymoon. The Sanjyukkokusen left Fushimi in the dead of night, and came down Uji and Yodo River before arriving in the early hours of the morning at Osaka. 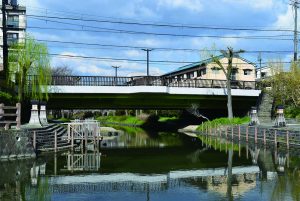 Fushimi back in the Edo period was a crucial spot, in which various paths from larger cities would meet. Ferryboats from Osaka, transport via canals like Takasegawa River and Kyoto, and other paths towards Osaka, Kyoto, Otsu and Nara all connected here. Kyobashi Bridge was the southern entrance to the town of Fushimi, from which the Yodo River ferryboat would start its journey here, and it was surging with life due to going along traveller’s inns, primary and secondary inns meant for the daimyo. The Choshu Domain Office, found south west of Kyobashi Bridge, was burned down in the Kinmon-no-Hen Rebellion, that took place 4 years before the battle of Toba Fushimi. 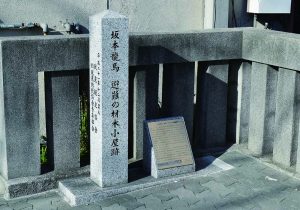 SITE７ 坂本龍馬避難の材木小屋跡 Site of the Lumber Hut where Ryoma hid

This monument is from when Ryoma Sakamoto was seriously wounded by the Fushimi Magistrate’s constable that attacked him back at Teradaya Inn, and how it is said that he hid at this lumber hut. There are various theories as to the exact location, but it is said to be around here for sure. 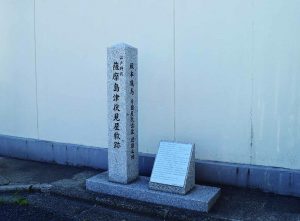 When Ryoma Sakamoto was attacked at the Terayada Inn, Oryo came running in here asking for help, before Hikohachi Oyama, the Fushimi Satsuma domain keeper, set sail to the ship that saved them. It’s on these waters (Go River) that the waterway is still in use as usual even today. Hikohachi Iwao was the elder brother to Iwao Oyama – a notable field marshal in the Meiji era. 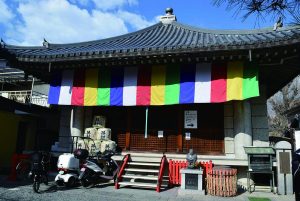 From early Edo, this was a prayer temple for the Satsuma domain. The Kyuresshi, or nine patriots, of the Terayada Inn incident are buried here. The characters on the gravestones were written by Takamori Saigo. It is also home to the room in which meetings between Saigo and Toshimichi Okubo, two greats of Meiji Restration, took place. The rooftiles feature the family crest of the Shimazu clan of Satsuma domain, a cross within a circle. 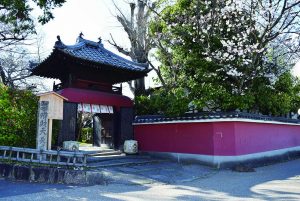 Chokenji Temple, with its remarkably beautiful vermilion Ryugu gates and earthen walls, was established in 1699. Happi-Benzaiten was a strong point of worship for the Geisha and Maikos from the nearby red-light district in Chuushojima.  Jukkokusen and other tourist boats go from outside Chokenji Temple to the harbour of Fushimi – telling the tales of the port town history. 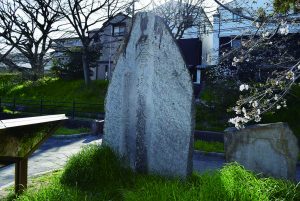 At the convergence between a stream from Uji River and old Takasegawa River stands the honoured monument for Ryoi Suminokura, who opened up the water transportation between Fushimi and Kyoto in the early 17th century. With its water level very shallow at only 30 centimetres, ferrymen sailing along Takasegawa River needed flat ships to cruise by gently, whilst pulling along at the front with rope. Their cargo going up the river would be rice, o-sake, shoyu, oil, marine products and other foods, housing items, everyday life items, wooden materials and fuel like charcoal. Heading back down, they would take two-wheeled wagons, cabernets, oblong chests, ironwork products, other manufactured items, farming equipment and night soil. 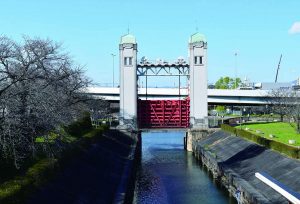 Misukomon Lock adjusts the water levels of Uji River and Go River (the harbour of Fushimi) that differ, making it possible to ferry people between the two – acting as an elevator in the water. It was completed in 1929 and operated until ferryboat freight ended on ships in 1962. Misukomon still stands today as a place to stroll around and take in the history of ferryboat transportation in Japan.

坂本龍馬とは  Who is Ryoma Sakamoto? 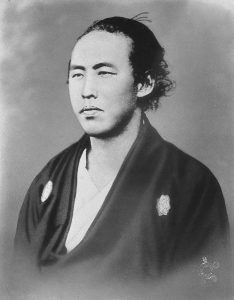 Ryoma Sakamoto was one of the samurai responsible for bringing forth the end of the Edo period and the dawn of the Meiji Restoration.  Ryōma advocated for democracy, Japanese nationalism, return of power to the Imperial Court, abolition of feudalism, and moderate modernization and industrialization of Japan. Ryōma successfully negotiated the alliance between the powerful rival Chōshū and Satsuma domains and united them against the Edo government. Ryōma was assassinated in December 1867, shortly before the Meiji Restoration. His love story with wife Oryo, and the Teradaya Inn incidents in Fushimi, Kyoto went down in history.  He is constantly chosen as one of the most favorite person in the Japanese history by present people in Japan.

Why not take a rest at Cafes and Restaurants at Ryomadori Street after strolling around?